About a month ago, I wrote about Merriwagga, a little town ten miles beyond the Black Stump, where I have strong family connections with one of the founding families, the Littles. Late last week I headed out there for the funeral of my beloved Great Aunt, Tid. (That’s right: we called her Tid Little. And until last week, I never even noticed that humorous tautology).

To get to Merriwagga, you basically drive through the sort of regional areas which are achingly familar to me: dairying and sheep-grazing land, with rocky outcrops and massive golden arches every hundred kilometres or so. The dead wombats and kangaroos by the road all sport fluoro paint crosses to indicate that their pouches have been checked and any infants rescued. Somewhere past Yass, you turn right and things shift from regional to rural, and finally, remote. There are few places to eat, few places for comfort stops, and the deflating roos by the road no longer appear to be marked. Life is tougher, and the dirt is redder. Blossoms and fruit grow where they naturally shouldn’t, and water is a constant discussion because it’s usually dry.

In my academic life I often write about the Gothic: the hauntingly beautiful; the perverse joy we get from terror; the uncanny. The uncanny, or unheimlich, is that which is strangely familiar. I have never lived in Merriwagga, yet on some level it feels like going home. 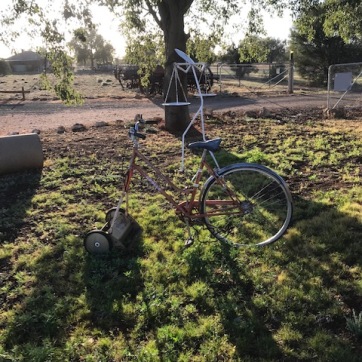 Adding to the uncanniness, the caravan park where we stayed is the old school site, and a mini-local museum. So the shared lounge room is the schoolroom where my Nan and uncles learned the three Rs. There was a commemorative photo of the school’s opening day, featuring three Littles, including my Nanna, Kath.

Nanna/Kath Little (the tall one in light clothes), with Uncle Roy at her feet.

Uncle Kevin, in the centre

Merriwagga likes to pay tribute to its pioneering women. There is a memorial in the town square, and when we were there, there were flowers on it, which I believe were for Aunty Tid.The flags in town were flying at half-mast. The whole town was at the funeral and in order for us to check in to the caravan park, the owner first had to leave the wake. A gentleman offered to call him for us, and during that conversation, the manager said: “they’re relos.” That gentleman assumed that the park manager and I were related. I had to tell him no, I thought he and I were; that I was related to the Littles, and explained that I was Kath’s granddaughter. He was my Dad’s cousin, and he told me that if I’m Kath’s, I’m a Little. Patriarchal naming conventions don’t mean much in a place where women just got on and did stuff.

The pioneering women photos in the school room heavily featured my great-grandmother, known to all as Granny Little.

Granny with a snake, and her belived rifle that took it out

My Dad’s cousin, Kevin, remarked, “when you tell people stories about Granny, they don’t believe you.” I told him that I knew — a few weeks back I was telling a story at work about how my parents have a cabinet that my Dad repaired because it had a hole in it from where Granny shot at a snake, and people looked at me like it was a tall tale. Then I go to a museum and find a picture of her with a snake in one hand, and a rifle that, as Kevin observed, was nearly as big as her, in the other. Kevin then told a tale about Granny wanting to fire at the crows who were pestering her chickens, and lined up a shot through her newly-louvred windows. Of course, the gun kicked up and took out about seven louvres!

(As an aside: perhaps chicken-fancying is genetic? I have 11 at the moment.)

Perhaps the most Gothic story of all is the one pertaining to the Black Stump itself. The story, is not, as most assume, about a tree stump. It is about Barbara Blain, the first person buried in the local cemetery. The story goes that her husband went out to shoot rabbit for tea, and when he came back there had been a tragic accident involving her long skirts and the campfire. Evidently what remained resembled a blackened tree stump. It’s a somewhat disturbing piece of local history, and suitably haunting for that hardy environment. 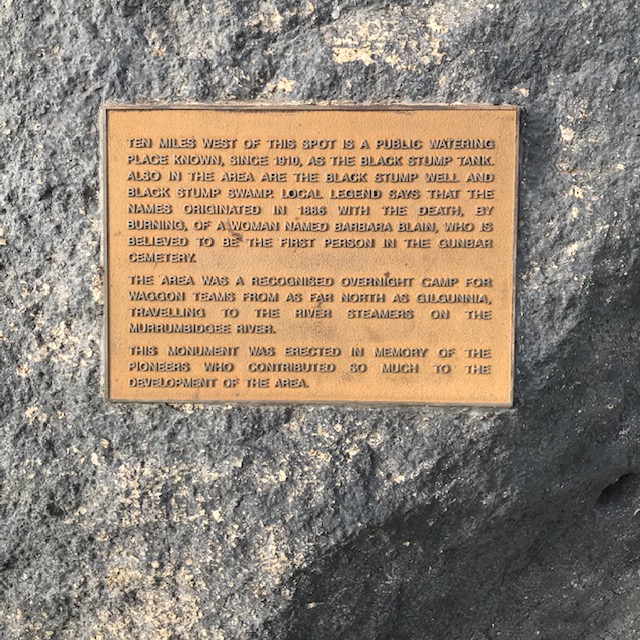 I first went out to Omeo Park when I was eight, to see Granny Little. Then at about eleven, we visited Uncle Roy and Aunty Tid. Then around nineteen years ago, I took my then-infant daughter out there, to visit with a friend who lived in Lockhart, and catch up with Aunty Tid & Uncle Roy. So I felt really sad that the last of my close connections with the town were gone. But I made some new ones. And on our return trip, as we headed back towards greener roadside vistas and the advertising for fast food became more frequent,  I began plotting how to convince my now-adult children that we need to take a road trip, in the hope that they find the same sense of belonging out there that I feel.

I live and work on the South Coast of New South Wales, Australia. I work in the higher education sector. My educational career has traversed Arts (Literature, Japanese, and Cultural Studies), Secondary Education (English, Japanese & Special Education), Learning Development (Disability Support) and Higher Education (Regional). I'm unapologetically interested in advocacy, politics, and popular culture. When I'm not at work, you can find me wrangling two adult children, myriad pets, and one long-term spouse. Opinions are my own. View all posts by kmcmahoncoleman