Our graduation celebrations were cancelled this year, but the regional campuses decided to still offer an opportunity to have graduation photos taken. UOW-Shoalhaven’s had to be postponed because of the announcement of local COVID sites, but Batemans Bay, Bega, and Southern Highlands had their very busy (but very fun!) photo shoots last week.

I headed up to Moss Vale on Monday to help out and to be a warm prop in the photos with certificates. And since graduating during a global pandemic is a once in a century experience, we took a leaf out of the 2020-COVID-safe-Santa-photos book and decided to offer graduates some photos that commemorate this very strange historical moment. In addition to traditional and family portraits, we swapped the traditional handshake photo for an elbow bump, and then took things a step further with UOW-branded commemorative masks, using tongs to keep 1.5 metres apart while handing over the certificate.

It was a lot of work to safely (ie while masked) assist with gowning of each graduate, keep the groups suitably separated, and to be able to offer personalised nibbles plates for each family group. But the smiles from the students suggest that it was all very much worth it.

We also took the opportunity to take some staff photos, and the leafy campus and grand architecture of the building make for a rather lovely backdrop. I’m really happy with how these shots turned out. Our photographer for the day, Carl, is a proud UOW-Southern Highlands alumnus and now a teacher, who gave up a day during his school holidays to come and capture these snaps for us.

As we near the end of the year, people often cheerfully ask me if things are winding down. In truth, I am not sure I’ve ever been more wound up!

Last week we had Graduation celebrations for our students in the Southern Highlands, Batemans Bay and Bega. And because the week wasn’t busy enough, Shoalhaven hosted a two-day event for Indigenous students. And, just to add to the degree of difficulty, the massive Currowan fire between the Shoalhaven and Batemans Bay closed pretty much every road into the area, and put celebrations in jeopardy.

The week started off in Moss Vale, which was pretty smokey, as you can see in the pictures. 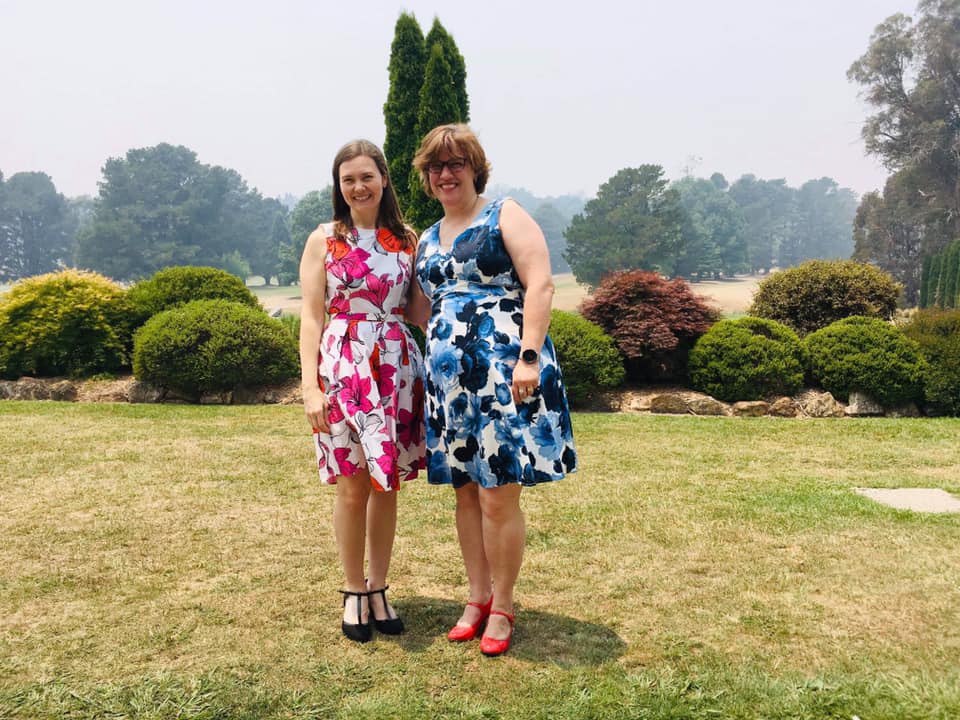 The guest speaker who gave the Occasional Address was none other than my friend and long-time collaborator, Dr Roslyn Weaver. Ros’ parents still live in Moss Vale and we all have a lovely catch-up when she makes her annual pilgrimage home each December. She’s currently using her research and writing skills while working in Vancouver. A UOW alumn and former tutor at the campus, she was a great choice to congratulate the students and inspire them that the skills and confidence acquired during their studies are very transferable. There is one graduate, however, we don’t want to go anywhere any time soon! Erin Acton is our Admin Assistant at UOW-Southern Highlands, who graduated with her BA.

I then spent two days with Indigenous students from the Shoalhaven. They undertook art and dance classes on campus, and then we all went on a Bush Tucker walk at Booderee the next day. I learned so much on that one hour walk!

Graduations at Bega and Batemans Bay also went off without a hitch. We even made front page news in Bega!

For at least a week beforehand, there were many urgent communiques about whether or not the celebrations in Batemans Bay might not be able to proceed. We created Plans B & C, which we thankfully didn’t need. In true enterprising regional style, however, I later discovered that the eight graduands who live north of the Princes Highway closure had developed their own Plan B, costing out a charter boat!

Since then, I have pretty much been in recovery mode, frantically trying to finish off a whole bunch of work stuff before I start my annual leave this afternoon. We have had HSC results and ATARs released; we are waiting on information about some very cool incentives to study at regional campuses–watch this space if you are thinking about studying at UOW-Shoalhaven, UOW-Southern Highlands, UOW-Bega or UOW-Batemans Bay from next year–there are some new scholarships in the pipeline. We had two finalists in the University’s Pod Decorating competition, an Info night at Shoalhaven Campus, and there are more info sessions and drop-in days to come.

Away from work, things are also busy. In addition to the usual festive activities and ever-increasing to-do lists that abound at this time of year, our eldest is turning 21 on December 21. We are in the middle of a record-breaking heatwave and half the country is on fire, so we’ve been hastily shifting her vision of a cute outdoor grazing platter and glasses of Pimms to something which still has those elements but hopefully without our guests contracting heatstroke and salmonella. (This may also feature lots of Zooper Doopers).

So from our regional team and my regional family, our very best wishes to you and yours for the holiday season. Stay safe, stay hydrated, and most of all: